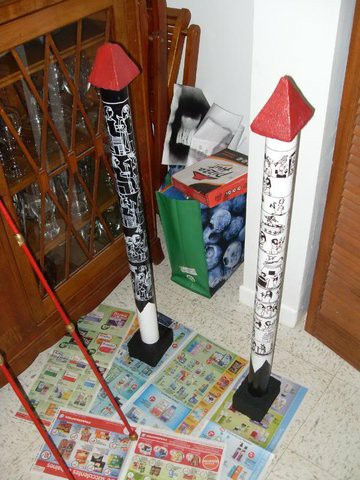 For the past 10 years, in my personal Temple, I had used Pillars made from PVC pipe placed in the very shaky foundations of foam squares, with painted foam tetrahedrons on top, that I carved out of the crumbly foam material by hand. The result as it appeared after finishing the painting over 10 years ago can be seen in the image on the left. I call these Pillars 1.0.

The result was, to say the least, very unstable, very apt to fall over or be knocked over by a zealous Zelator, and after many years of wear and tear, both pyramids ended up falling apart, and both bases utterly crumbled into dust, without exaggeration!  In short, I was left with Pillars that could no longer stand, what echos of the fallen Temple of Solomon!

Thankfully for these humble Pillars, however, this Solomonic magician was able to work on them to help them rise again. This time around, in 2018, I endeavoured to learn from my previous mistakes. Foam would be out of the question as a building material. Moreover, I wanted to build them such that they could have lights within the red capitals, as was the case in the original Golden Dawn temples, and is mentioned in the Neophyte Ceremony. Thus, it was clear that I would have to make some very different design choices here. I debated many options and consulted many Fraters and Sorors for ideas along the way.

In the end, the bases of Pillars 2.0 were made from sturdy red ceramic. I chose the size to balance stability with the room they would take up in our small Temple space. The red ceramic bases were filled with black and white polished stones, which I exorcised and consecrated according to Key of Solomon procedures after taking these pictures.

To add additional stability, the Pillars were filled with additional stones of the matching colours–black in the black Pillar and white in the white Pillar–and filled with sand, following the wise council of my friends Frater Morgan Eckstein and Frater Joseph Max. The sand was also Solomonically exorcised and consecrated.

Although both the wise Frater Nick Farrell and Joseph advised me against using glass Pillar capitals, I opted to use metal wire-frame capitals nested within glass bulbs to hold them and function as back-ups should the Pillars be knocked over and the bulbs shatter. The reason Nick and Joseph both advised against glass capitals is that both had witnessed horror stories of Fraters knocking over not one, but both pillars, tipping over the Altar, dropping Dadouchos censers, sending hot coals and flaming incense flying everywhere, and other nightmarish scenarios come true. Hopefully, our Temple will have better luck! May the Lord of the Universe bless them and protect them, Amen!

In the end, I only used glass capitals because the lanterns with the inset holders for tealights were light-weight, affordable, and transparent enough to still show the flickering light of the tealights through their glass forms when lit. Following Nick and Frater João Pedro-Felliciano’s intelligent advice, I opted to use electric flickering tealights rather than actual candles so that if they ever should fall over, there would be no risk of fires.

Before varnishing the bulbs, I tested them to make sure that the flickering lights could be seen through them in a dark Temple, and sure enough, they provide the perfectly visible illumination, consistent with the Neophyte Grade Ritual’s allusions to “veiled” lights:

The Lamps that burn, though with a veiled light, upon their summits show that the Pathway to Hidden Knowledge, unlike the Pathway of Nature – which is a continual undulation, the winding hither and thither of the Serpent – is the straight and narrow way between them.

The result in these Pillars:

Here are the “finished” pillars just prior to the Solomonic exorcism and consecration of the stones. I’m not entirely sure that I will leave the tops of the bulbs in their undulating ridged form. I may attempt to craft some red tetrahedrons and overlay them on top, as my inner G.D. traditionalist always wants to keep those elements as intact as possible.

Alternatively, I am also considering exorcising and consecrating the glass bulbs with painted or engraved sigils for the Solomonic candles in the Key of Solomon overtop. A final possibility is to do the Solomonic consecrations and sigil-markings and overlay the tetrahedrons over the consecrated capitals. We shall see. I await inspiration one way or the other.

For now, however, these Pillars 2.0 are fully-functional and I am quite happy with the fruit of all of these many hours of work invested in many coats of paint, varnishing exorcising, and consecrating with Solomonic Oil, Incense, and Holy Water. Light in extension!