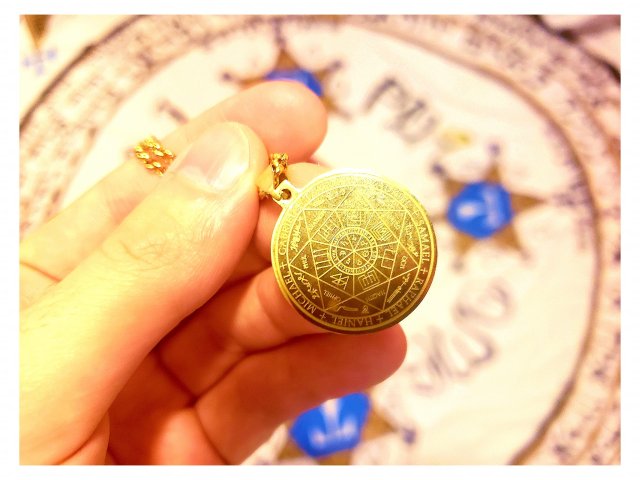 A. An Unexpected Trinity: Trifecta of Mysterious Synchronicities

Yesterday was Easter Sunday, the Holy Day on which Christians celebrate the Resurrection of Christ, which enabled him to complete his mission of establishing the New Covenant, liberating humanity through faith from their ancient legacy of erroneous action that missed the mark (hamartia, sin) of the Good Willed by God, and to send the Holy Spirit to dwell within us as a sanctifying, guiding, and empowering Force. My upcoming article Charismata Magica: Gifts of the Holy Spirit in the Solomonic Grimoires will go into into some depth of how the latter event impacted the grimoire authors and how the Fruits, Graces, and Gifts of the Holy Spirit play fascinating roles within the European grimoire tradition.

As I was fading off to sleep, I was contemplating some passages of Scripture that I had recently read and the idea occurred to me that perhaps it would be ceremonially and spiritually fitting for me to commemorate my return to Christianity through a water Baptism. I had already been Baptized by water once within the Catholic Church and completed all of the sacramental initiations up to and including Confirmation, but after my long time away from the faith studying other traditions, a new Baptism might be appropriate. Still, I had never heard the Pastor of my Church speak about water Baptisms for adults in the entire year I had been attending this particular Church and I was not sure how they handled such things.

In the morning, I began to celebrate Easter by reading from the New Testament. My attention was called to 1 Corinthians 15 in the Amplified Bible, which reads:

1 Now brothers and sisters, let me remind you [once again] of the good news [of salvation] which I preached to you, which you welcomed and accepted and on which you stand [by faith].

2 By this faith you are saved [reborn from above—spiritually transformed, renewed, and set apart for His purpose], if you hold firmly to the word which I preached to you, unless you believed in vain [just superficially and without complete commitment].

3 For I passed on to you as of first importance what I also received, that Christ died for our sins according to [that which] the Scriptures [foretold],

5 and that He appeared to Cephas (Peter), then to the Twelve.

6 After that He appeared to more than five hundred brothers and sisters at one time, the majority of whom are still alive, but some have fallen asleep [in death].

7 Then He was seen by James, then by all the Apostles,

8 and last of all, as to one [b]untimely (prematurely, traumatically) born, He appeared to me also.

9 For I am the least [worthy] of the Apostles, and not worthy to be called Apostle, because I [at one time] fiercely oppressed, [killed Christians,] and violently persecuted the Church of God.

10 But by the [remarkable] grace of God I am what I am, and His grace toward me was not without effect. In fact, I worked harder than all of the Apostles, though it was not I, but the grace of God [His unmerited favor and blessing which was] with me.

11 So whether it was I or they, this is what we preach, and this is what you believed and trusted in and relied on with confidence.”

Humbled by this reading, I took a ritual bath to prepare for Church, worshiping the Most High through worship songs and Psalm passages as I do every morning.  Then, I walked to Church with Soror R.A. Along the way, she expressed some doubts about how we could possibly know whether Christ had really been Resurrected and what ancient textual evidence there was that Christ even existed. I told her about the extra-biblical evidence for Jesus we have from Tacitus and Josephus and about how, until recently, many archaeologists had doubted whether Pontius Pilate had even existed until 1961, when the Pilate Stone was unearthed, which bore the inscription, as translated from Latin into English:

Further evidence was revealed in 2018 when a ring that had been discovered in Herodium near Jerusalem and which bore the inscription “of Pilates” was deciphered using advanced photographic technology.  To quote the Jerusalem Post,

It reads “of Pilates,” in Greek letters set around a picture of a wine vessel known as a krater, and is said by archaeologists to be only the second artifact from his time ever found with his name. Kraters are a common image in artifacts of that time and place.” 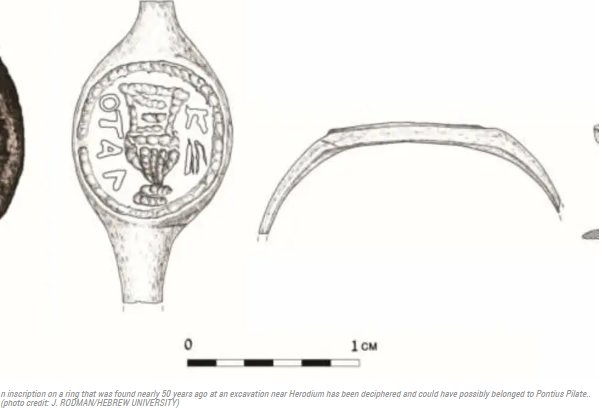 We arrived at Church and joined in the worship. When the Pastor began to deliver his Easter Message, however, I was blown away by not one, not two, but three synchronicities, a veritable trifecta:

(1) For the first time ever, the Pastor described the procedure for Water Baptisms for Adults and explained that an opportunity for Water Baptism would be happening within the next two weeks. He also explained that they were accepting sign-ups for anyone interested. I was amazed given the reflections that had come to me the night before. I wondered if the Holy Spirit had given me a Word of Knowledge through that.

(2) The Pastor described the archaeological and textual evidence for Christ and Pilate, including the very Pilate Stone I had discussed with Soror R.A. Her mouth fell open in awe when he started to discuss this.

(3) The Pastor then went on to analyze 1 Corinthians 15, the very passage I had been nudged to read that very morning! I bowed my head, humbled at this, giving thanks and honouring the mysterious ways of the Holy Spirit, who abides in all of the faithful and guides, teaches and sanctifies them from within as they learn to walk in the Spirit in whom they “live, move and have [their] being” (Acts 17:28).

On this auspicious Easter Sunday, Day of the Sun, I performed Cryptoconsecratio by Mass–covert consecration of magical items performed in Church–of the gold disc phylactery depicted above, which features the names and sigils of the 7 Heptameron Archangels and the 7 Olympic Spirits of the Arbatel De Magia Veterum traced over with a consecrated Solomonic Burin of Art.  Since gold is a soft metal, it is fairly easy to engrave; a compass and ruler facilitated the tracing of the circle and straight lines respectively.

By way of context, I have already established relationships with all 7 of these Archangels and with the Olympic Spirits Bethor and Aratron, the latter two relationships of which I began back in 2010 when I first conjured those two spirits to assist with making Pentacles of Jupiter and Saturn respectively. In the coming year, however, I plan to begin work with all 7 of the Arbatel Olympics and wear this phylactery in work with them. I also plan to wear the seal under my shirt in daily life for general protection and to faciliate maintaining my connection with the spirits represented within it.

Out of respect for traditionalism, however, I have to point out here that this seal combining Heptameron and Arbatel spirit names and sigils does not occur in either the Heptameron or the Arbatel, although the sigils of the Archangels and Olympics contained here are exactly rendered as depicted in those two grimoires. As I learned through the kind sharing of knowledge from my friends BJ Swayne, Billy Ashford-Webb, Chijioke Onyeogubalu, and Andy Foster, I was able to learn that this combined seal was designed by the talented Frater Asterion. Through additional research, I traced it back to a 2011 post he made on Solomonic Magic, which is accessible here and in which Asterion refers to it as his Planetary Lamen.

Frater Asterion explains the structure of his design and the traditional inspiration for it in this way:

“This pentacle was inspired by a figure in the last book of Faust’s Magia Naturalis et Innaturalis, only he used Olympic Spirits alone and I used Archangels too. My blog banner is based on that, if you look closely. I wrote [the Names] in Latin characters for illustrative purposes, for my upcoming book to be published in Romania, Cartea Arhanghelilor (The book of Archangels), and also as a didactic chart for my personal students.”

Through his own diligent research, Billy Ashford-Webb was able to locate the original diagram in Magia Naturalis et Innaturalis from which Asterion derived his inspiration for this combined Arbatel and Heptameron phylactery: 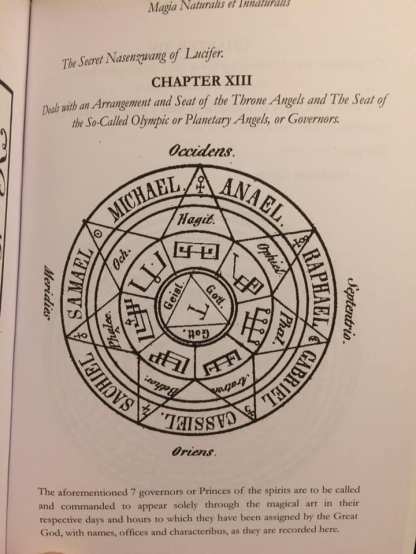 Frater Asterion’s sleek and efficient design, with its inclusion of the Arbatel and Heptameron Sigils of the Olympic Spirits and the Archangels suits my purposes well as defined above and was accepted under the guidance of the Angels and Olympics involved. Please note that although I have received commission requests from several people to craft a version of Asterion’s Planetary Lamen, I will not be doing any of these. Frater Asterion retains the copyright and all credit for his own design work. Anyone who would like their own version of this lamen to be crafted should message him directly.

In this same Easter Sunday Mass, I also performed Cryptoconsecratio by Mass on my new White-Handled Knife, Black-Handled Knife, and also the Cauldron consecrated to Gabriel that I alluded to in a prior post. All of the above were covertly carried into Church in a backpack, which I prayed over during the Mass. Before the Mass, I exorcised these tools and the phylactery and consecrated them with Solomonic Holy Water and consecrated and exorcised Frankincense, both prepared according to the instructions of the Key of Solomon, before bringing them with me to Church.

The experience was powerful and moving as always and the trifecta of mysterious synchronicities made it even more so. Glory to you, YHVH, El Eloah, Adonai Rapha, Glory to Yeshua Risen, Glory to the Holy Spirit who lives and works within us! In the name of Yeshua, we give thanks and praise. Amen.