Today, Tony Fuller shared a picture of William Wynn Westcott’s handwritten version of Flying Roll IX, On the Right and Left Pillars, which contained a very fascinating detail I have never seen anywhere else before.

Note: that I am linking here to the standard published version, not the  handwritten Westcott version in Tony’s possession, out of respect for him.

In the rare handwritten version, there is a notably different instruction about the Qabalistic Cross as compared with the version that most of us have learned through other sources.

The version most often published, even on the website of the Golden Dawn Research Center (http://www.golden-dawn.org/gd_fr9.htm), says:

In making the Qabalistic Cross on your breast it is correct to touch the Forehead and say Ateh-Thou art; the Heart-Malkuth; Right Shoulder, yeGeburah; left shoulder ve-Gedulah, and with the fingers clasped on the breast say, Le, olahm, amen! 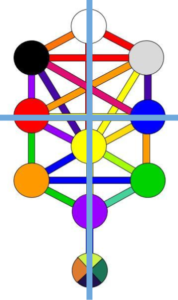 However, in the unpublished handwritten Westcott version, the instructions do not simply say that the fingers should be clasped on the breast.

Instead, the full instructions for the QC say that the Magician should:

“Clasp the fingers, raise the hands.“

This instruction to raise the hands after clasping them in the QC is one I have never before seen published in any book by any Golden Dawn author before. This point cannot be emphasized enough; in my 12 years of acquaintance with the G.D. system, I never saw it anywhere, either in primary or secondary sources. Even Israel Regardie’s Golden Dawn is missing this fine point!

When holding an implement in banishing or invoking, he said, the same was true with the hands clasped around the implement. This is exactly as I had envisioned since it would end the Rite with a symbolic Qabalistic realignment with Kether while simultaneously lining it up with the Third Eye and Crown Chakra in the Yogic system.

I invite you to try the Qabalistic Cross with this alteration and see if you notice any differences in the overall flow of energy and holistic impact of the symbolism.  It’s no small point!