I hope you are all doing well! After 7 years since I joyfully served as Ceremonial Magic Moderator here at our beloved Occult Corpus, I’ve finally found my way back home to OC. It feels good to be back and see these insightful posts from all of you again!

During my time away, I was studying the Eastern traditions and was initiated into Zen through Myokyo Zenji, into Advaita Vedanta through Swami Omkarananda and into Kashmir Shaivism through shaktipat diksha from Swami Swarupananda Mahamandaleshwar Maharaj. I was also continuing my studies in therapy and social work and working with survivors of the Holocaust and older adults in palliative care; social work is, for me, my focus of Rosicrucian healing work and service. Finally, after doing some extensive Jungian ‘active imagination’ work, I’ve returned to the Western Mystery tradition to study and practice Qabalah, magic, astral alchemy, tarot, skrying, and pathworking once again.

Now, onto the topic of this thread: Have any of you created any unconventional or untraditional implements of your own in your ceremonial work?

If so and you would be willing to share them, I would love to see what you’ve created and hear about the rationale behind it.

To begin the conversation, here is a dagger I recently created for use in banishing and invoking Pentagram and Hexagram work in the G.D. tradition. As you may know, in the G.D., a dagger with a simple black handle is generally used for this purpose, unadorned with symbolism. This is what I used in the past. Recently, however, I felt inspired to push this teaching a little further. Chic Cicero is the only G.D. adept I know of who sometimes adds symbols to his banishing/invoking daggers; he uses the Eye of Horus because Horus is the Godform of the Hiereus in the Outer Order and the Banishing dagger is symbolically linked to the Hiereus Sword.

I accept that idea and integrated it as well, but I wished to go further by bringing in pentagrammatic elemental alchemical symbolism (for Pentagram work) and planetary hexagrammic symbolism (for Hexagram work) as well as some Enochian and Grimoiric aspects. 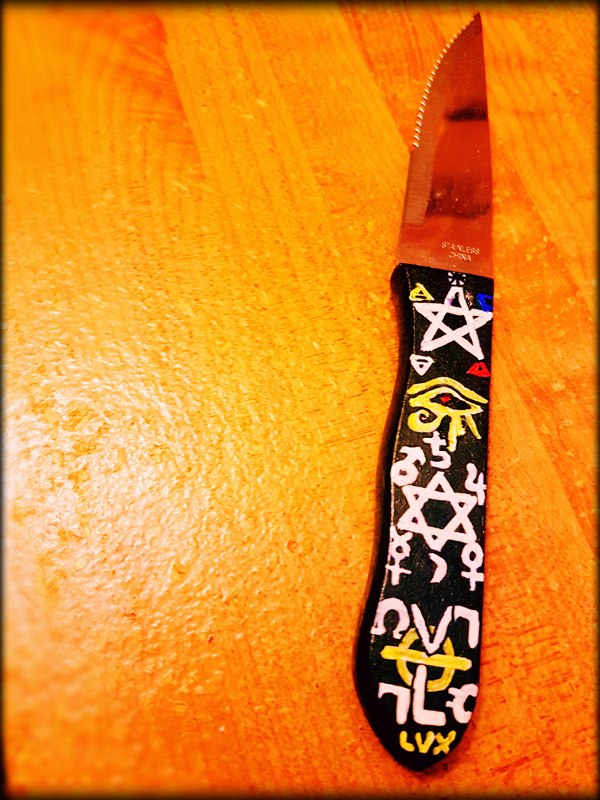 The back side of the dagger includes the first letters of my magical Motto written in Enochian script. The use of Enochian is untraditional, but the writing of one’s motto on the dagger handle is fairly traditional. What is very untraditional here, but works well for me, is the use of two sigils, one from the Black-Handled Knife of the Key of Solomon and one from the White-Handled Knife, symbolizing banishing and invoking powers respectively to balance these dual aspects of ritual work that I intend to use the dagger for. 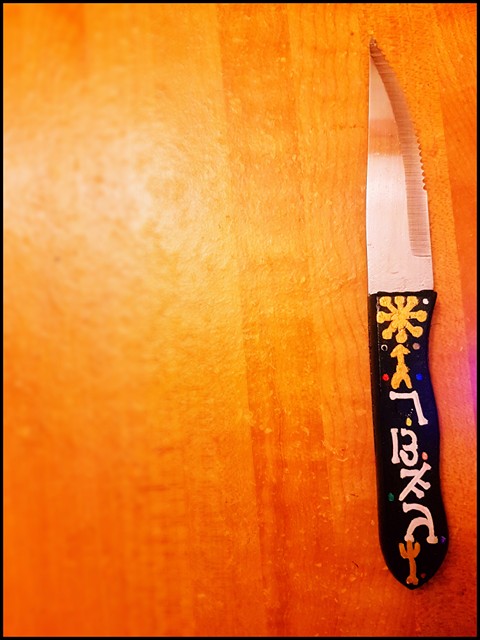 The result is an elementally, planetarily, and Solomonically balanced ritual implement for general planetary and elemental banishing and invoking work.